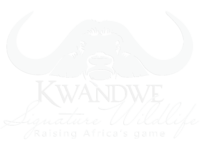 Nestled in the heart of South Africa’s unspoiled province of the Eastern Cape lies the world renowned Kwandwe Game Reserve (est. 1999) of legendary quality and standard.  The reserve spans an area of more than 22 000 ha and provide a wide selection of vegetation and terrain giving rise to our legendary herds.  That has been the foundation on which Kwandwe Signature Wildlife was built in 2013 shortly after the Chouest family purchased Kwandwe PGR.  With a passion and knowledge of whitetail breeding in America they wanted to translate that same understanding and drive to some of the best species in South Africa.

The founding buffalo herds on Kwandwe PGR originated from Addo Elephant National Park as well as Sable Ranch of which the combination has produced some excellent specimens.  In the years past our animals used to be sold in the traditional farm style auction in a shed from our extensive herds which produced bulls like Rufus, Spies, Derde Mag, Conan, Leonadis and more recently bulls like Bollinger, Bond, Charlie Bravo, Bansela, Whiskey Bravo and Mthathi are all examples of this quality continuation. From these extensive herds we carefully selected the best of the best to add to the breeding program.  In addition to the Kwandwe foundation animals we also acquired the best genetics we could acquire from around the country and now boast with genetics from the most of the legends as well as the up and coming legends of the industry.  KSW is now home to the herds of Leba, Mandla and our home bred bull, Mkhulu (52 7/8″+), and have a collection of buffalo for the connoisseur, but we have never forgotten our routes, where it all began and we do our utmost best to offer a wide variety of buffalo every year to meet all our buyers’ needs and entice new entrants to the market.

Our two main Zambian sable herds combine two of the greatest lines around in that of Nike/Palanka represented in ZULU and Madala/Piet represented in JABU.  These bulls boast not only with great genetic lineage and quality but reflect that in stature boasting measurements of 51 7/8″ and 51 1/2″ respectively.  The combination of these two lines are bound to produce some excellent offspring and thus far the results speak for themselves.  Great planning also went into the acquisition of female animals that joined both these herds that combine as many quality Zambian lines as we could find.

The same dedication also carries through to all our herds of which we regularly produce excellent genetics.  We now put some of our best genetics back on the extensive main reserve where they integrate with our herds and allow the legend to live on.

Our vision and breeding philosophy is built around the fertility, productivity and characteristic features of the species.  We select our females for these characteristics and choose our males based on horn mass, conformation and horn length.  The management principles revolve around creating outstanding signature specimens and our commitment and passion to breed these specimens is carried through every detail of our management practices.

We strongly believe that every animal that leaves Kwandwe Signature Wildlife will be able to adapt to a wide variety of habitats on South Africa.  The tough climate in the Eastern Cape, virulent hartwater conditions and temperature extremes result in this area providing hardy, adaptable specimens to other areas

Our mission on Kwandwe Signature Wildlife has and will always be to work in conjunction with nature to breed the best possible animals with all round conformation and not just place the focus on any one specific gentic trait.

We aim to ensure that every animal that leaves the property is able to adapt anywhere in Southern Africa and challenge clients to let us know if there is any complications so we can ensure we constantly improve.

Nature was created and has the extraordinary ability to teach us that no matter how much we think we know, it knows better.  That is certainly the case in our industry as well.

The excitement of driving around on 22 000ha and finding exceptional animals that we can only dream of breeding and nature just keeps giving.

That is why we still believe firmly in our extensive herds as something there is working and we definitely don’t want to mess it up.

We have been put in this position to act as custodians for this and future generations and aim to ensure that we leave a legacy to future generations.  We aim to pass this vision on to other reserves through mentorship and guidance.